Things to Do in Scranton (Inspired by The Office)

Fans of the popular show, The Office, can relive some of the show’s best moments in these areas

It can be hard to describe the immense popularity of The Office, a US sitcom that’s in the style of a ‘mockumentary’, (a fake documentary) that features the lives of office workers in a company that supplies paper, named Dunder Mifflin. The show is shot in the style of a documentary, with single-camera setups and a format where characters talk to the camera to share their thoughts. The show amassed an incredibly large following in its later seasons, and is still considered to be one of the most popular sitcoms aired, even though it ended in 2013. Despite ending over 7 years ago, the show is still incredibly popular, with fans bingeing its episodes on Amazon Prime, and other streaming services.

The show is set in a small town named Scranton, in Pennsylvania. The first season was shot in-location, with other seasons being shot out on a set in Los Angeles. Despite the fact that most of the show physically takes place in Los Angeles, there are plenty of references in the show to specific places in Scranton that welcome visitors and fans of The Office. The small town of Scranton served as the perfect place for The Office, as the show is meant to highlight what life is like in small-town America, in a standard company with ‘normal’ co-workers. The show does have a British counterpart, also named The Office, but the British version only ran for two seasons. The star of the British show, Ricky Gervais, also plays a large part in the production of the US version of The Office.

Cooper’s Seafood is a popular reference within the show, and plays a pretty big role in the show itself. In the episode “Business Ethics” (season 5, episode 3), Michael Scott takes Holly there, and discusses the ethical considerations of Meredith’s actions. Michael Scott refers to Cooper’s Seafood as having ‘the best Maine seafood in the world’, and the restaurant is one of Michael’s favourite places in Scranton.

Michael with 2 lobsters. From the Office Season 5, Episode 3, “Business Ethics”. Property of NBC.

Cooper’s Seafood – the real restaurant – truly is a popular Scranton seafood place, and is modelled after a pirate ship. The restaurant is quite large, and is cordoned into separate rooms, featuring a pub, a lighthouse bar, a tiki bar, a private coral room, and other areas. Fans will be interested to know that the restaurant also has a gift shop, one that includes items like lobster shot glasses, fish puppets, and Dunder Mifflin-themed gifts.

Alfredo’s Pizza Café was first featured in the office in the episode “Launch Party” (season 4, episodes 5 and 6), where Michael celebrates the launch of the new company website by having a pizza party. The viewers find out that Alfredo’s Pizza Café is the team’s favourite pizza place – of course, in the episode chaos ensues when Michael accidentally orders food from Pizza by Alfredo, a terribly pizza place (which is, thankfully, fictional). 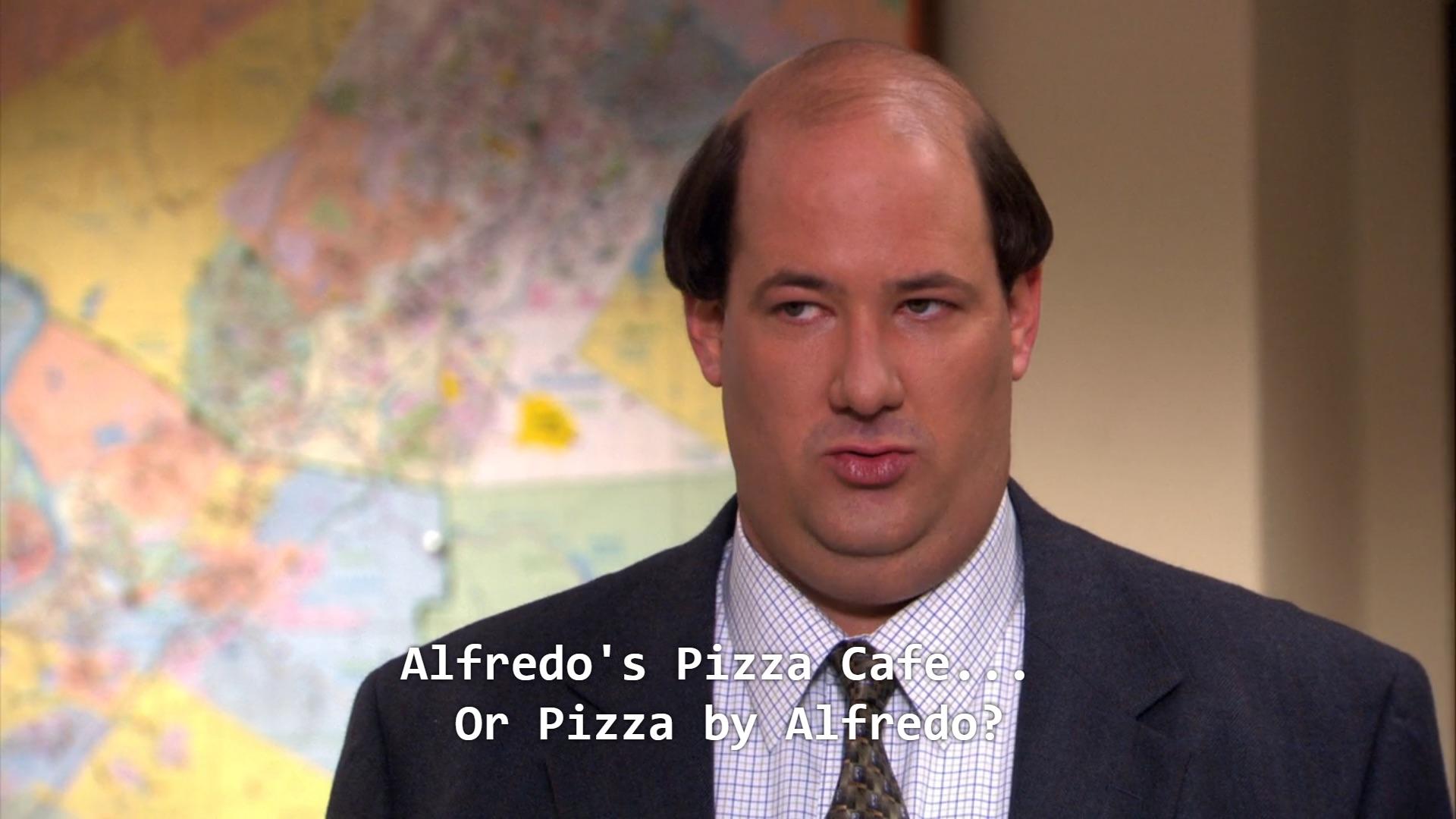 Kevin Malone asking Michael if he got the pizza from Alfredo’s Pizza Cafe or Pizza by Alfredo. Season 4 Episode 3. Property of NBC.

The good news is that Alfredo’s Pizza Café is a real restaurant in Scranton, Pennsylvania. The restaurant is designed like a classic Italian restaurant, and the menu offers a wide variety of options, from traditional pizzas to salads and sandwiches as well.

Of course, Michael’s favourite restaurant is Chili’s, and Chili’s is the site for the incredible Dundie award ceremony, in the episode “The Dundies” (season 2, episode 1). It’s also the restaurant where Pam gets outrageously drunk, and ends up getting banned from the restaurant. Unlike Alfredo’s Pizza Café, there isn’t really a Chili’s in Scranton. The closest Chili’s is in the next town, in Wilkes-Barre, and is similar to other Chili’s restaurants around the world – the food served is a mixture of American and Mexican, and one of its famous dishes are the ever-popular (according to Michael) baby back ribs.

The lake is also featured in the show, in the episode “Beach Games” (season 3, episode 23). In this episode, the whole office goes to the nearby lake for some ‘beach games’, but with an added twist – the winner of the beach games would become regional manager, as Michael was interviewing for a higher position in New York City. The actual episode was filmed at a fake beach near Hansen Dam, as shooting would normally happen in Los Angeles, and not Scranton. The lake makes another appearance in the episode “Dunder Mifflin Infinity” (season 4, episode 3), when Michael ends up driving his car into the lake after meticulously following his car’s GPS. 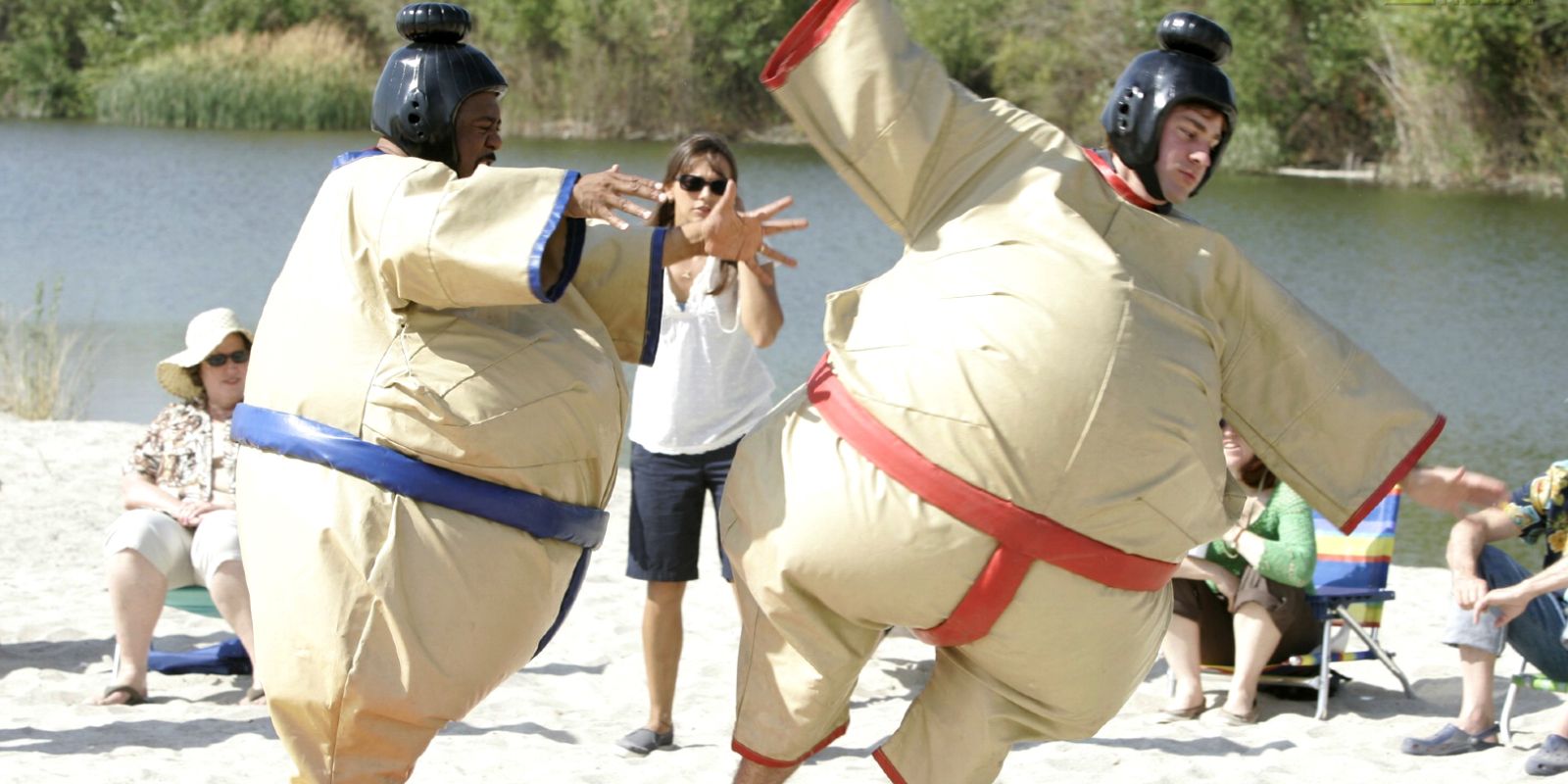 However, Lake Scranton is a real place, and is considered to be a reservoir built with a dam in the early 1900s. The lake also has a 3.5 mile running track around it, and is a pretty place to visit for a quiet time by the water. The lake is also a main source of drinking water, and is owned by the Pennsylvania American Water Company.

The Anthracite Heritage Museum was first featured in the rap video made by Michael and Dwight, named “Lazy Scranton”. A play on the song Lazy Sunday on the show Saturday Night Live, the song was featured in the episode “The Merger” (season 3, episode 8) and the rap video contains footage of the museum. In another episode, “Healthcare” (season 1, episode 3), Michael talks about the Lackawanna Coal Mine when thinking about taking his staff there on a tour, after promising them a ‘surprise’.

The Anthracite Heritage Museum, located in McDade Park in Scranton, details the history of coal mining, its related industries, and of the culture of the people of north-eastern Pennsylvania. The museum talks about the history of immigration, of the people who came from Europe to work in anthracite mining and textile industries. The exhibits in the museum feature mining tools, replicas of old miner’s homes, and coal mine tours that are not too far from the museum itself. The museum’s exhibits showcase collections from life in the mines, mills, and factories. Pieces from miner’s homes, neighbourhoods, and local places are on display, and tour guides are ready to explain the rich history of mining in the area. The tour takes viewers into a mineshaft that’s about 300 feet underground, where tour guides then explain the history of anthracite coal mining.

The mall, of course, receives a feature in The Office. In the episode “Women’s Appreciation” (season 3, episode 22), Michael invites the women of the office to the Steamtown Mall in Scranton. To thank them for their help with his relationship with Jan, Michael treats them to one item each from Victoria’s Secret.

Though this episode was actually shot in Los Angeles, there is a Steamtown Mall in Scranton, and it’s a great place to visit if you’re a fan of The Office. The mall – like other spots in the city – embraced the show and climbed onboard with Office-mania. The mall features a large cardboard display of The Office, along with memorabilia from the show in the mall’s windows. You may even find the Office t-shirts here. The best part is the elevator – it’s embossed with a huge picture of the Dwight Schrute bobblehead – one of Dwight’s prized possessions.

Sourced via Daniel Case (on Wikipedia)

After the success of the show, the mayor of Scranton was open to the idea of redefining the city, thanks to the show’s cultural impact across the United States, and around the world. Apart from these particular spaces, the Dunder Mifflin logo is on a lamppost banner in front of the Scranton City Hall, and newspapers have published travel guides to Scranton, featuring hotspots for tourists who are interested in visiting places that were mentioned in the show.

It’s a fun place to visit if you love the Office, because the city embraces the show as well, making it much more enjoyable and friendly to its visitors. Apart from that, Scranton is a relatively quiet town, which makes it easier to go through the city, see the sights, and click pictures of places mentioned in the show. It’s particularly enjoyable to visit Scranton after watching the show, because you feel like you know this quaint town and its people, after sharing the characters’ lives for about nine seasons. The great part is that these locations also share a love for The Office, so you won’t feel like trespassing or bothering the locals, because everyone shares their enthusiasm for the show. It’s a great spot to visit to reminisce about The Office, and is sure to trigger another re-watch when you get back home.